JuliaMono - a monospaced font for scientific and technical computing 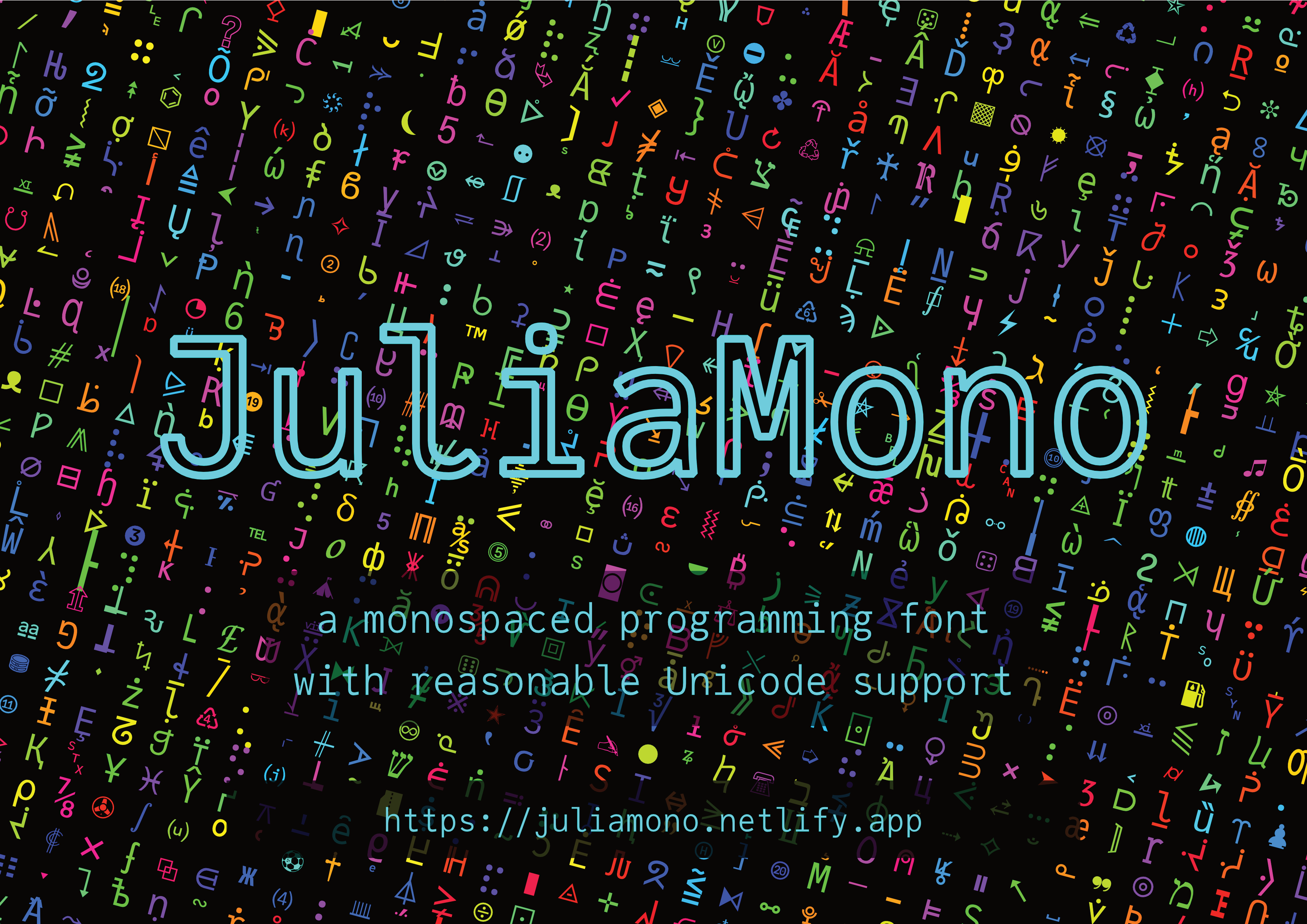 JuliaMono is a monospaced typeface designed for programming and in other text editing environments that require a wide range of specialist and technical Unicode characters. It was intended as an experiment to be presented at the 2020 JuliaCon conference in Lisbon, Portugal.

This site uses JuliaMono for all text; if your browser can’t[3] (or you didn’t allow it to) download and display web fonts, you’ll only see the font in action in the images. You’ll see three large dots here when/if the font has been successfully downloaded:

To download and install JuliaMono, see the instructions here. 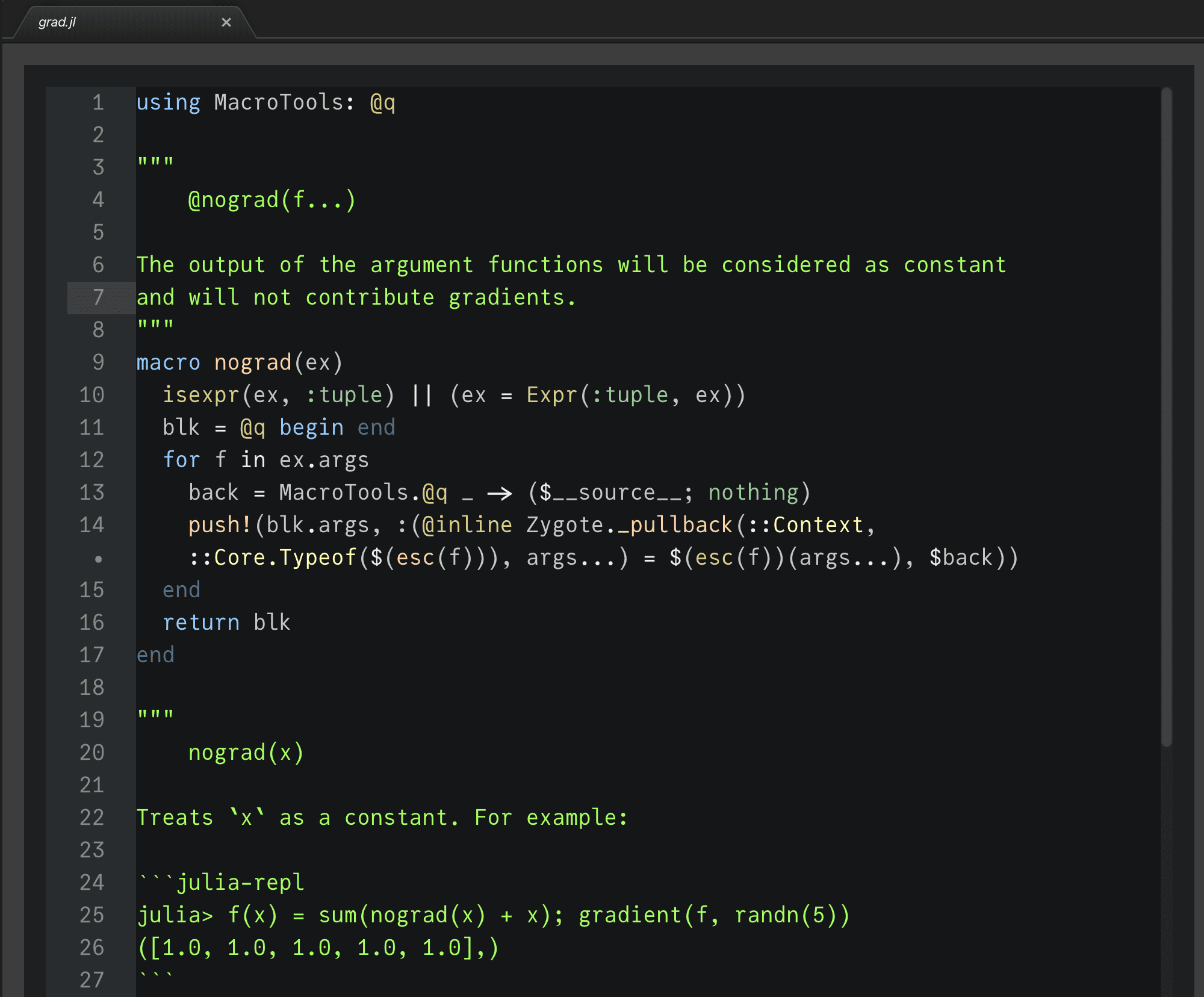 And in VS Code. 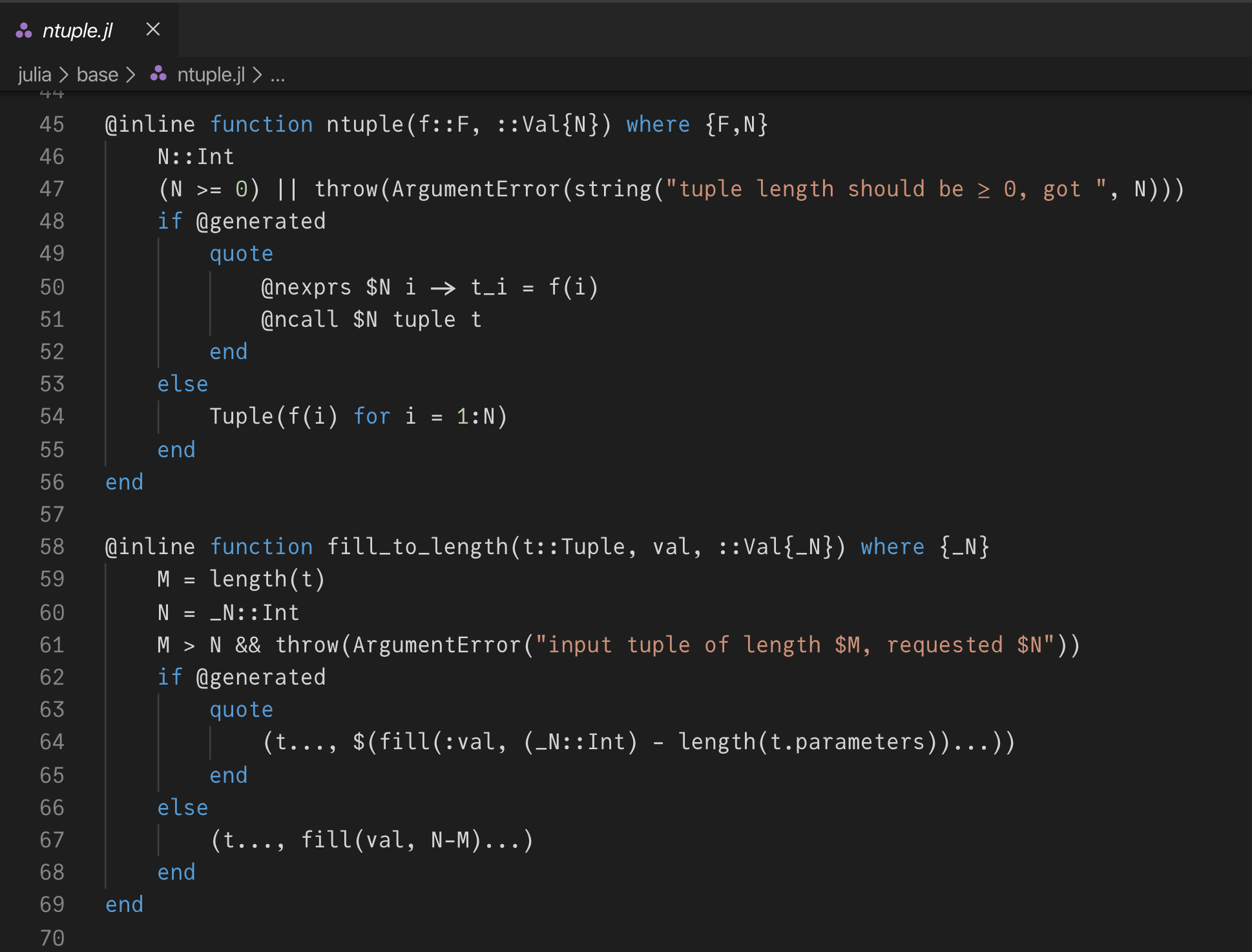 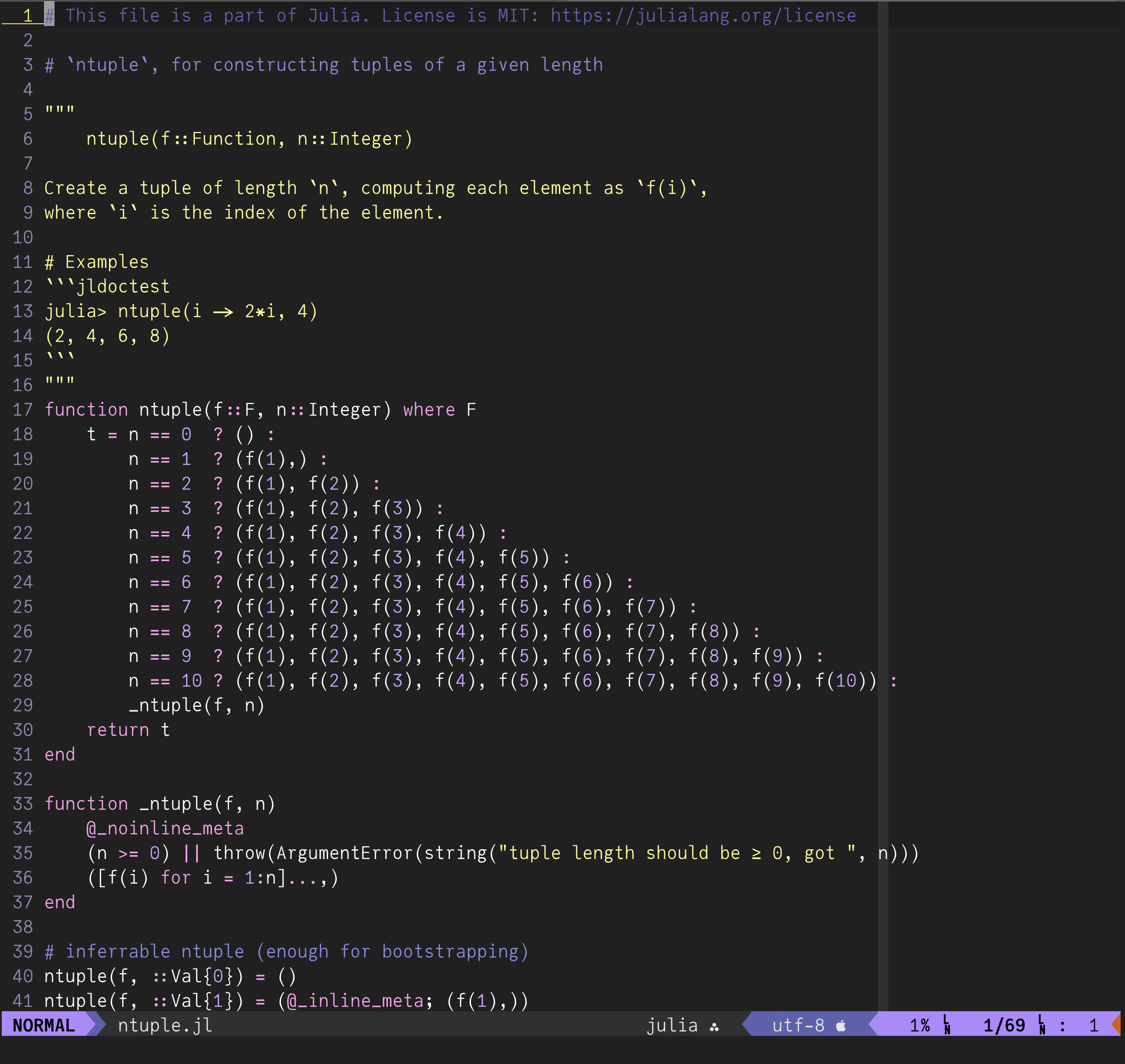 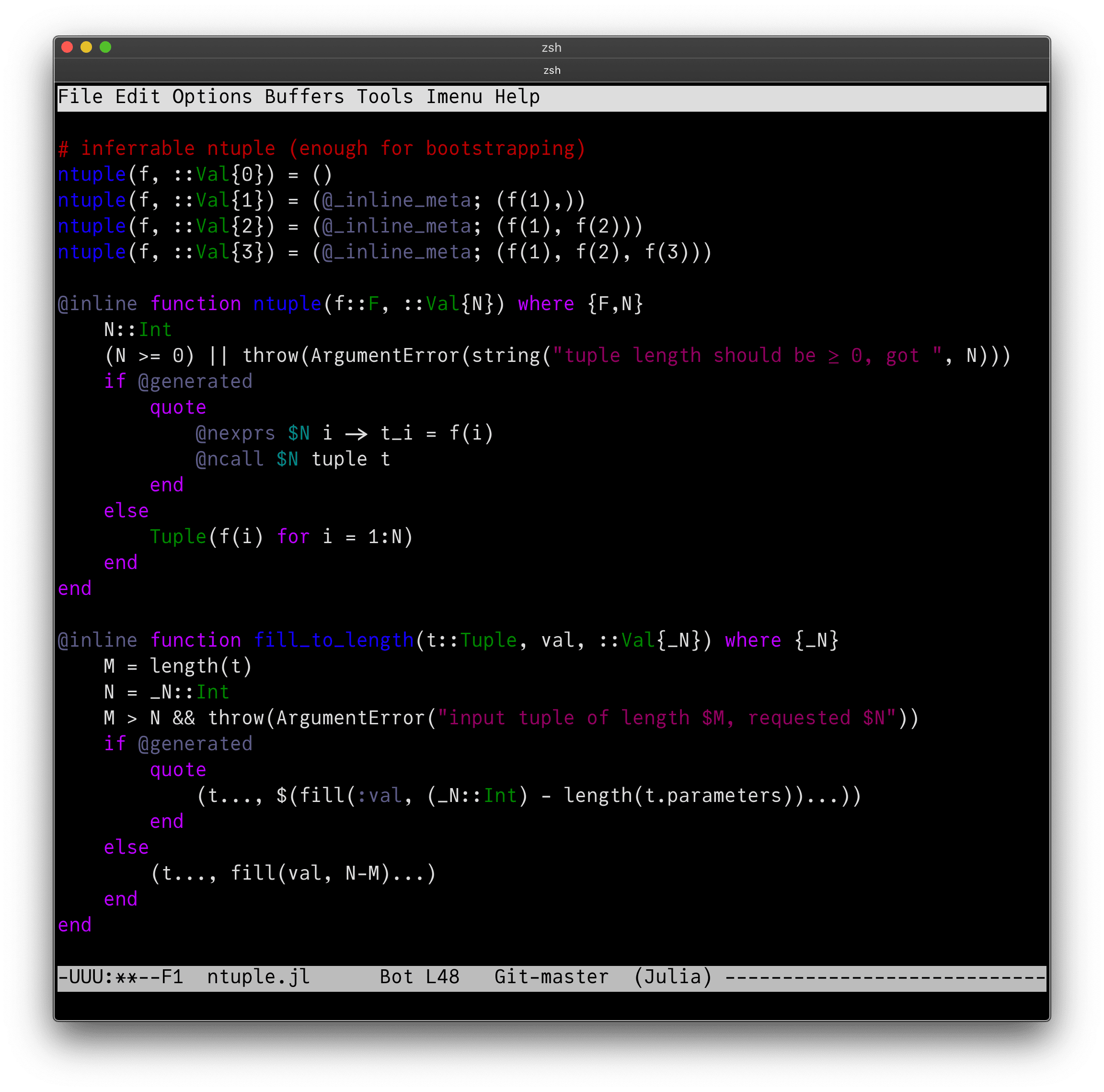 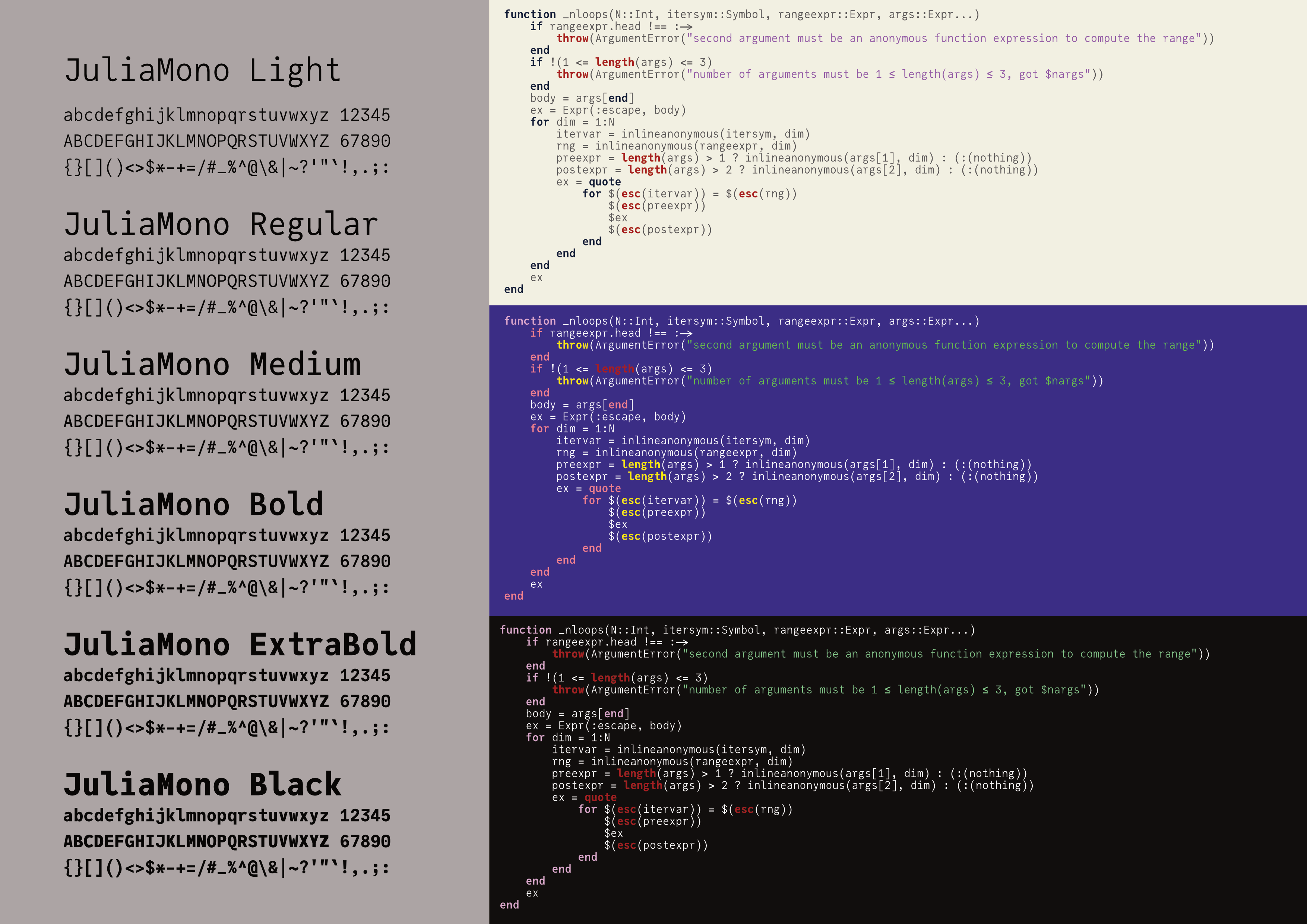 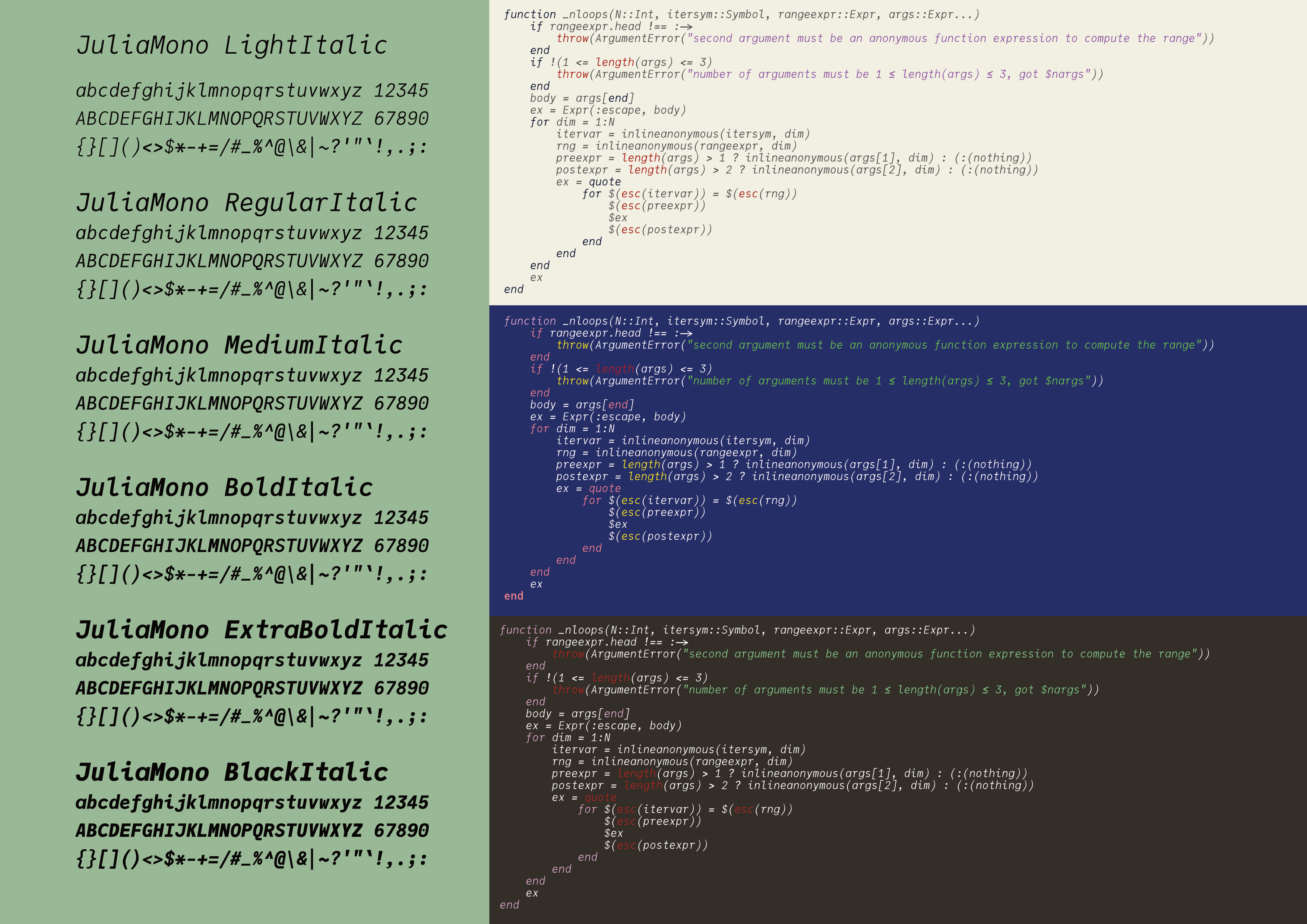 The following examples will be rendered in JuliaMono by your browser (if it’s successfully downloaded the web font versions), so I hope what you see here is close to what I made.

The CSS markup applied to the following code also uses another weight of the typeface JuliaMono-Medium, which is a smidgeon bolder:

There are different weights of JuliaMono[4], so you can control the amount of contrast you have in your highlighted code:

They all occupy the same amount of horizontal space, so they can be mixed without losing alignment.

(There are also versions of two of the fonts with “Latin” in the name: these are stripped down versions supporting just the basic MacRoman/Windows1252 “Latin” character sets. You probably don't want to use these - they're intended for use mainly as place-holders, of interest if you want to have more control over font loading times in web browser-based applications.)

In the hands of a virtuoso (such as Dr Zygmunt Szpak, the author of the following Julia code fragment[5]), the range of available Unicode characters can be quite expressive:

Here are some samples of various languages[6] :

One of the goals of JuliaMono is to include most of the characters that a typical programmer or monospaced-font user would reasonably expect to find. (Except for all those emojis - they are best handled by the operating system.) Here's a few less common ones:

In JuliaMono, every character is the same width, because this is a monospaced typeface. Usually, typefaces with a lot of Unicode mathematical symbols are not monospaced, because they’re intended for use in prose and \( \LaTeX \) applications, rather than in programming code. You probably want ∑s in your code rather than \( \sum \)s, because the big ones will upset your formatting.

From a design perspective, forcing every character into the same size box is a problem. It’s like fitting every human being of whatever shape or size into identical airplane seats - some characters are bound to look uncomfortable. There’s never quite enough room for a nice-looking “m” or “w”. 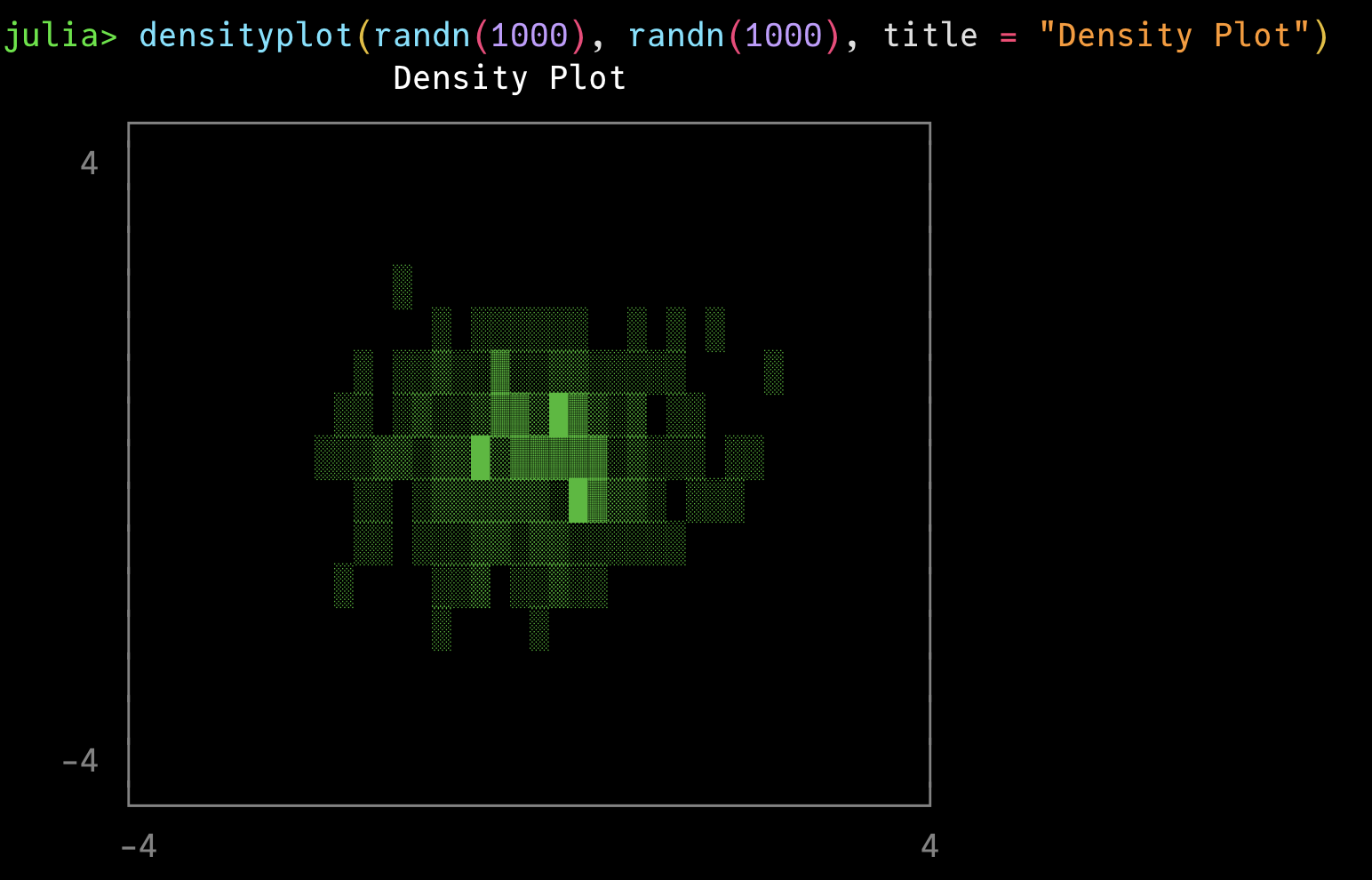 and the ImageInTerminal.jl package uses Unicode characters to display images in the terminal: 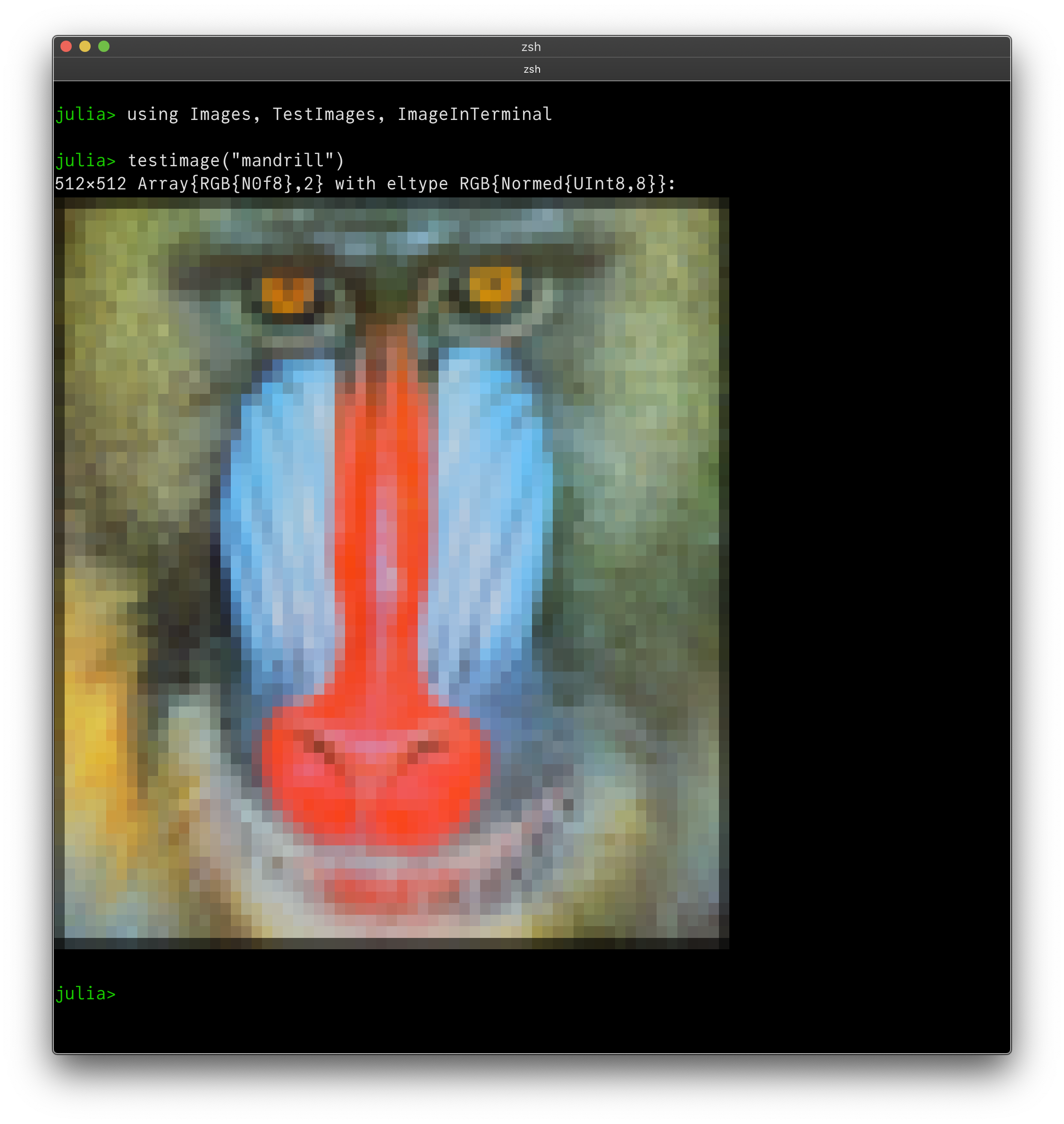 It’s also a good idea to support box-drawing characters, such as the ones used for displaying DataFrames.jl output (terminal permitting):

(Can you spot the little used and sadly mathematically-unsupported “times” (×) character?)

For a comparison of JuliaMono with other math-capable monospaced fonts, visit mono-math.netlify.app, which shows how Unicode math symbols look.

JuliaMono is quite greedy[8], and contains quite a few Unicode glyphs.

(Of course, size isn’t everything - quality can beat quantity, and other fonts will offer different experiences[9]).

If you want to know whether you can use a Unicode character as an identifier in your Julia code, use the undocumented function Base.isidentifier(). So, for example, if you have the urge to use a dingbat (one of the classic Herman Zapf dingbat designs) as a variable name, you could look for something suitable in the output of this: 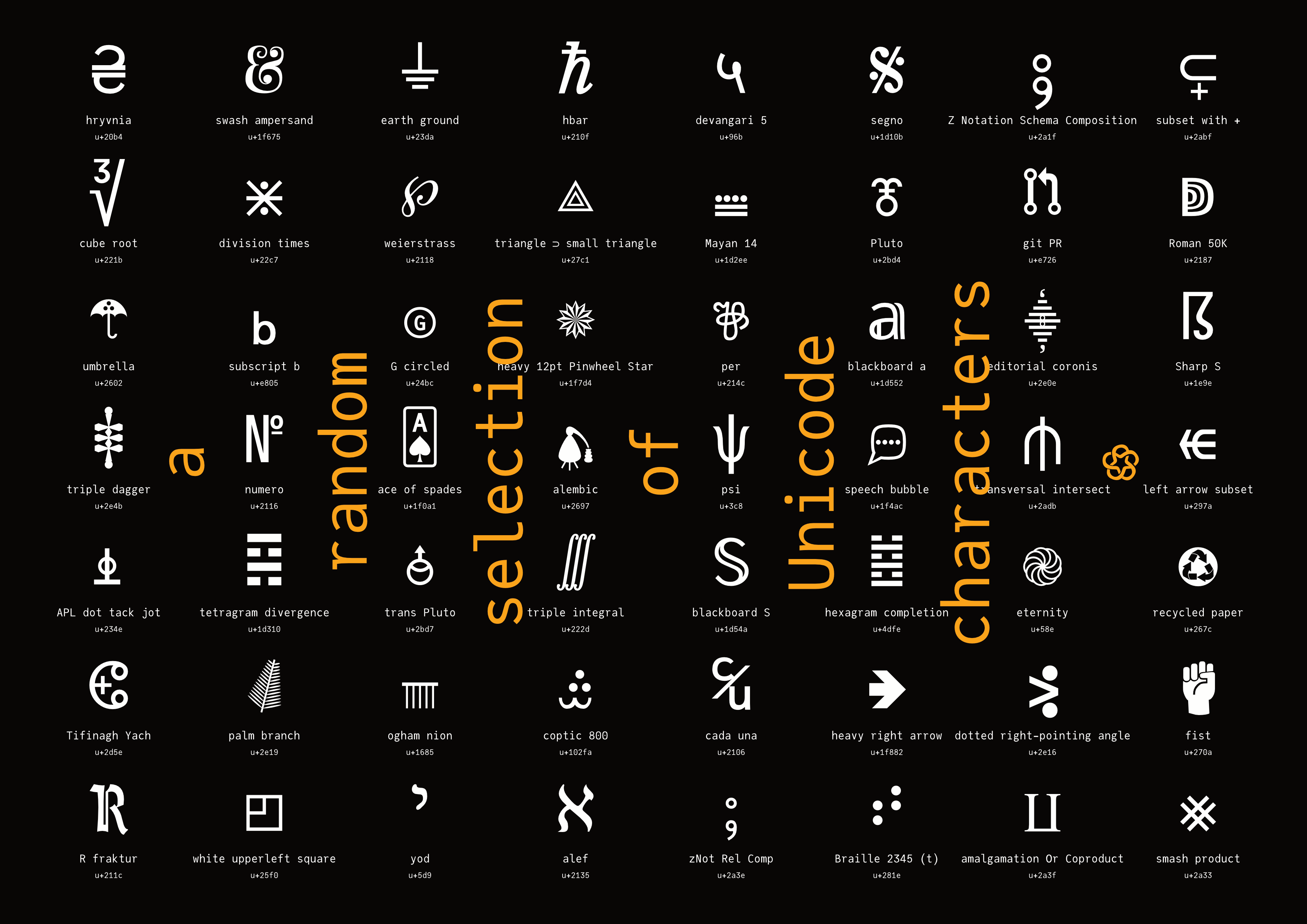 JuliaMono is an OpenType typeface. OpenType technology provides powerful text positioning, pattern matching, and glyph substitution features, which are essential for languages such as Arabic and Urdu. In English, OpenType features are often seen when letter pairs such as fi in certain fonts are replaced by a single glyph such as ﬁ. These ligatures have been used ever since printing with moveable type was invented, replacing the occasional awkward character combination with a better-looking alternative.

To be honest, I’m not a big fan of their use in coding fonts (and I’m not the only one[10]). I like to see exactly what I’ve typed, rather than what the font has decided to replace it with.

The Julia language is designed to use Unicode characters, and so ligatures aren't usually needed, but there are a few places where the obvious Unicode glyphs are not accepted by the language, where the ASCII-art substitutes can be improved by the judicious use of alternate glyphs. There are also a few places where some subtle tweaks can enhance readability without introducing ambiguity.

In JuliaMono, the following substitutions are applied when the contextual alternates feature is active:

You can see some of these in action in the following code fragment:[11]

OpenType fonts also offer you the ability to choose different designs for certain characters. These are stored as a ‘stylistic set’.

All the options are stored in the font, and are often referred to by their internal four letter code (not the best user-oriented design, really). For example, the contextual alternates listed above are collectively stored in the calt feature.

Sometimes, an application will show the options more visually in a Typography panel[12], usually tucked away somewhere on a Font chooser dialog.

Here’s a list of the stylistic sets currently available in JuliaMono.

All this fancy technology is under the control of the application and the operating system you’re using. Ideally, they will provide an easy way for you to switch the various OpenType features on and off.

Browser-based editors such as Juno and VS Code support many OpenType features in their editor windows, but not in the terminal/console windows. They provide a settings area where you can type CSS or JSON selectors to control the appearance of features, and you’ll have to know the feature codes. Some features are opt in, others are opt out; this too can vary from application to application.

Terminal/console applications also vary a lot; on MacOS the Terminal and iTerm applications try to offer controls for OpenType features, with varying degrees of success. On Linux, some terminal applications such as Konsole and Kitty offer quite good support, but others such as Alacritty offer little or none, as yet. [13]

If the application allows, you should be able to switch the calt contextual ligatures off, particularly since quite a few people won’t like any of them in their code. For the following listing, I switch the calt set off using CSS (see here), and then enable some of the alternative stylistic sets: compare characters such as the 0, g, a, j, and @ with the previous listing:

(I originally liked the idea of a circular @ sign, but in practice it doesn’t work too well at small point sizes, as the details disappear. But I’ve kept it anyway.)

It's possible that you don't like even the few ligatures and contextual alternate characters provided in JuliaMono. If switching them off isn't possible, or not drastic enough, you can strip them out of the font with the following terminal magic (courtesy of @fredrikekre):

There are a few areas of the Unicode system that have been officially kept empty and are thus available to store characters that are not part of the standard. These are called the Private Use Areas, and there are three: \ue000 to \uf8ff, \UF0000 to \UFFFFD, and U100000 to U+10FFFD.

Each typeface can do its own thing in these areas. In JuliaMono you'll find these, among others, and if you ask nicely I might add some more:

The obvious drawback to using characters in a Private Use Area is that you have to have installed the font wherever you want to see them rendered correctly, unless they’ve been converted to outlines or bitmaps. If the font isn’t installed (eg on github), you have no idea what glyph - if any - will be displayed.

Now you can insert the logo in strings by typing \julialogo:

It’s usually possible to type Unicode values directly into text. This is a useful skill to have when you’re not using a capable REPL. On MacOS you hold the Option (⌥) key down while typing the four hex digits (make sure you’re using the Unicode Hex Input keyboard). On Windows I think you type the four hex digits followed by ALT then X. On Linux it might be ctrl-shift-u followed by the hex digits.

Thanks to: Thibaut Lienart for his Franklin.jl web site builder; to Jérémie Knüsel who provided invaluable suggestions and advice; to Dr Zygmunt Szpak for his cool maths code; to Simeon Schaub for the issues and PRs, and to others in the Julia community for help and suggestions.


© Cormullion. Last modified: September 05, 2021. Website built with Franklin.jl and the Julia Programming Language, based on the "basic" template.